Pay rose by 3.1% in the three months to August, compared with a year ago, while inflation for the same period was 2.5%.

The latest official data also showed unemployment fell by 47,000 to 1.36 million in the three months to August. The jobless rate remained at 4%.

David Freeman, the Office for National Statistic’s (ONS) head of labour market, said: “People’s regular monthly wage packets grew at their strongest rate in almost a decade, but, allowing for inflation, the growth was much more subdued.

“The number of people in work remained at a near-record high, while the unemployment rate was at its lowest since the mid-1970s.”

The ONS figures showed the number of people in work was little changed at 32.39 million, down by just 5,000.

The average pace of wage growth was 4% before the global financial crisis.

Economists have been puzzled why wages have grown so slowly even as unemployment has fallen sharply.

Wages including bonuses rose at a pace of 2.7% in the three months to August.

However, Samuel Tombs, chief UK economist at Pantheon Macroeconomics, said the latest wage growth rates were unlikely to be maintained.

“The recent pick-up in wage growth has been driven partly by the loosening of the public-sector pay cap for some workers,” he said. “For instance, most NHS workers received a pay rise of at least 3% in July.

“But the government still is keeping a tight lid on pay rises in other departments, while this year’s increase in NHS pay is the best in a three-year deal. Public sector pay growth, therefore, likely has reached a ceiling.

“The recent upturn in wage growth also has been flattered by the recent rebound in average hours.”

Here’s a reason to be cheerful. In the three months from June to August we had, on average, the biggest pay rise in nine years!

But slow down. The fact that 3.1% is the biggest pay rise since February 2009 says more about how weak pay growth has been in the last decade than how strong it has been in the past year. Strip out the effect of inflation (as measured by the Consumer Prices Index) and you get pay growth of just 0.6%.

Then look back at the last decade, the worst decade for living standards in 200 years. If you’re a half-full person, well we’re up by about £25 per week on average since the squeeze on living standards was at its tightest back in 2014.

But if you’re half-empty, we’re still earning about £20 a week less than we did 10 years ago when the global financial crisis struck. 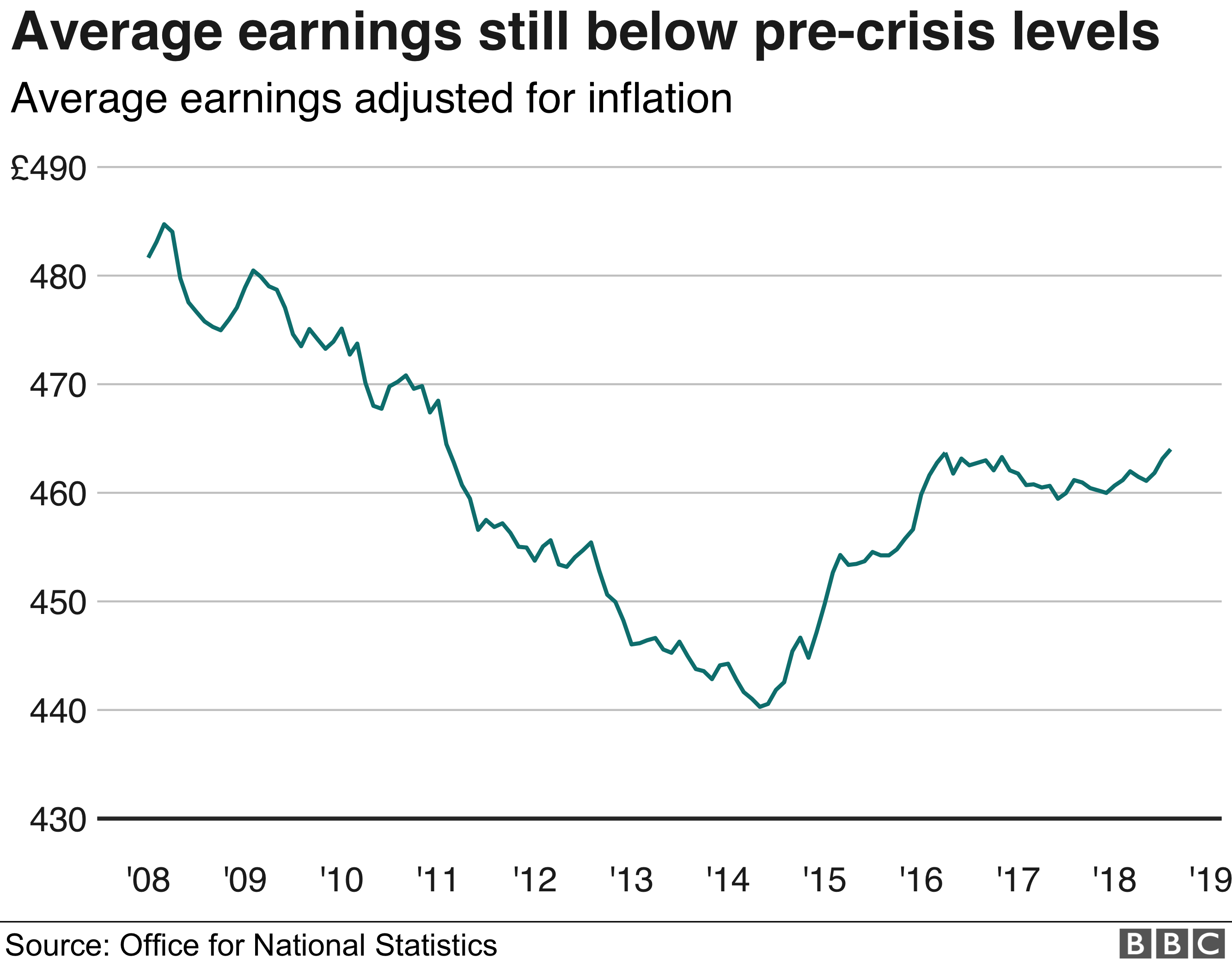 The British Chambers of Commerce (BCC) also said it did not expect this trend to continue.

Suren Thiru, head of economics at the BCC, said: “While wage growth increased again, the pace at which pay growth is exceeding price growth remains well below the historic average, meaning the current squeeze on spending power is unlikely to ease.

“Achieving a meaningful improvement in wage growth will be an uphill struggle unless the underlying issues that continue to limit pay settlements are tackled – notably sluggish productivity, considerable underemployment and high upfront costs for businesses.”